The Diplomat on The Evolution of the New Taiwan Identity: Plus ca change 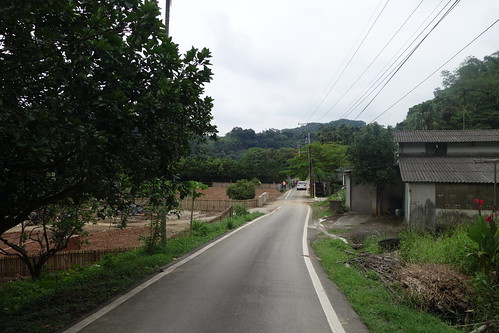 The marvelous Miaoli 16, which runs along the south side of the Mingde Reservoir.

The Diplomat ran a piece on the evolution of the Taiwanese Identity by Linda van der Horst, a nice echo of my post on Albert Axelbank's piece from the 1960s. It was well meaning, but wrong in several particulars and I think in its overall interpretation of the situation. Some small errors:


The KMT was established on the mainland in 1911 and retreated to Taiwan after its defeat by Mao Zedong’s Communists.

The KMT was established in 1912, disbanded, and then reformed in 1919. I think the writer means to say the Republic of China, not KMT [UPDATE: Linda van der Horst says the mistake was caught but not corrected in time for publication]. The next error is far more serious...[MT: and is now corrected]


An overwhelming majority of Taiwanese do indeed share blood with the Chinese across the strait. Chinese migration to the island started in the 17th century, when the Dutch arrived on “Formosa” (Portuguese for beautiful) and needed farmers to cultivate the land. The indigenous tribes that they found were hunter-gatherers and not farmers, so the Dutch sailed across the strait and in some cases literally captured Chinese farmers that they brought back to farm the island.

Nope. The indigenous tribes were accomplished farmers operating resource rich societies plugged into trading networks that crossed southeast Asia, not hunter-gatherers, a fact easily learned (for example). The Chinese were imported because the Dutch colonialists needed a tractable population dependent on the Dutch, that would produce a surplus, farming that land in a way the Dutch could count and tax. Unlike the aborigines, who would happily trade but would not consider themselves taxable subjects, and resisted Dutch rule.

Massive kudos to her for using the phrase "pro-Taiwan" to describe Lee Teng-hui. One beer on me if we ever meet....

Those are minor issues. The piece itself presents what has become the conventional view of the "rising Taiwan identity", especially in the media. Being Taiwanese means having aboriginal ancestors...


“If your ancestors have been in Taiwan long enough [pre-1949], then there is a big chance you will have indigenous blood,” said Chun-chieh Chi, professor in ethnic relations at the National Dong-Hwa University in Taiwan. Every era – indigenous, Dutch, Spanish, Hokkien Chinese, Japanese, Nationalists – left its own imprint on Taiwan’s inter-marrying population.

...this search for aboriginal ancestors is a way to assert a non-Chinese identity through nostalgic search for an alternative ancestry, but the truth is that a huge chunk of the post-1949 population also carries Austronesian gene markers, because the peoples of South China from which many in that population come, prior to the Han in-migration that began in the last quarter of the first millenium CE, were Austronesian peoples just like the Taiwan aborigines. The various Boat People of southern China, as in Hong Kong, for example, are thought by some scholars to be remnant populations of these peoples.

The interesting point here, as the writer observes, is not so much Taiwanese are finding such ancestors but that they feel a need to. Foreigners often assert that aboriginal "blood" heritage makes the Taiwanese different, but the reality is that the deep and pervasive aboriginal cultural influence on Taiwanese culture is the key inheritance of the Taiwanese. These ideas about differences of "blood", updated with the term "genes", remain a form of primitive nationalist essentialism that should have no place in modern discourse. Though in fairness, ideas about "aboriginal blood" are generally asserted against the Chinese claim of "Chinese blood" for Taiwanese...

This rise in Taiwanese identity has gone hand in hand with the democratization of Taiwan after martial law was lifted in the late 1980s, because “people were able to openly express themselves and discover their identity under the new democratic period,” says Gerrit van der Wees, a former Dutch diplomat and lecturer in the history of Taiwan at George Mason University in Virginia.

The explanation of van der Wees (it is related to democracy), coupled with polls showing how it emerges in the 1990s, makes a neat narrative about the development of the "rising Taiwan identity" (bear in mind that people do not discover identities; they construct them). Never mind that the poll van der Horst uses is probably not reliable.

But what has gone before? What did the "rising Taiwan identity" rise from?

Note this paragraph, because it displays the function of the "rising Taiwan identity" as a media catchphrase/trope:

van der Horst appears to be using this quote to argue that prior to the "rising Taiwan identity" the locals had an ROC Chinese identity. Which is totally bogus pro-KMT nonsense.

What occurred in the 1990s was not "rising Taiwan identity" but a shift in the nature of the Taiwan identity itself. Prior to democratization the people perceived themselves as Taiwanese and asserted this identity not against China, but against the KMT. Taiwaneseness was how you fought the KMT: the point of reference for the construction of the pre-democracy identity was KMT authoritarianism and exploitation, as recounted in countless works of the period. Indeed, politicians fighting the KMT were known as tangwai, "outside the party", a term which still relates them to the Party. The KMT attempted to control all expressions of Taiwaneseness, from religious festivals to language, to subsume Taiwaneseness into Chinese culture, and to suppress independence. This massive apparatus of state control testifies to the broadness and strength of that identity.

In the 1990s democratization opened up new avenues for exploring the idea of Taiwaneseness and what it means. Several things happened in the 1990s. First, the DPP established itself as a legitimate and legal alternative to the KMT and standard bearer of Taiwan-centered politics. The rise of democratic politics meant that the Taiwan identity could no longer by defined as resistance to the System: the tangwai were now part of the system in the form of the DPP and its allies. Further, the KMT under Lee Tung-hui, who was president throughout the entire decade, co-opted many DPP programs and positions, and thus, appeared to be Taiwanizing. That made it difficult to oppose the KMT as an anti-Taiwanese party.

The reason polls from the early 1990s show a strong proportion of "Chinese" is because the old Taiwanese identity had learned long before to lie to the State and how to safely discuss their identity. With democratization, people started telling the truth to pollsters. Let me shamelessly steal Frank Muyard's compilation of polls... 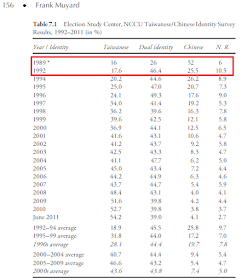 The 1989 numbers are from a UDN poll, which appears maybe to have flipped the dual identity/Chinese columns, but the high number is indicative -- nobody was sure they could speak out about their Taiwan identity in safety. In 1989 Lee Teng-hui and diehard mainlander rightiest Hau Pei-tsun were still tussling for control of the KMT and the government. The non-mainstream (rightist) faction lost key struggles within the Party and in 1993 many exited to form the New Party. Observe that in the numbers collected by Muyard the Chinese identity collapses quickly -- between 1992 (recall that there was still a national security law under which dissidents were kept in jail) and 1996 it falls by a third and by 2000 has completely disappeared except among old mainlanders. People don't give up complex nationalist social identities within a single short decade. The shift occurred because people lied to pollsters and then stopped lying. Another sign of that is the fall in the "no response" answer...

The "dual" identity remains relatively stable, testimony not to some confusion about identity but to the many meanings of the term "Chinese". Polls do not ask people to define "hua ren" or "Chunghua mintzu" as they relate to themselves, probably deliberately, to avoid providing evidence that "We're Chinese" for Taiwanese means something like what "We're Europeans" or "We're Westerners" means for Frenchmen. Muyard points out, however, that over time, when you give those polled the choice of "Taiwanese" or "Chinese", the number who choose "Taiwanese" has rising past 70%.

The second thing that occurred in the 1990s was the rise of China -- here the good doctor Shen is half-right, bless his deep Blue heart. The new identity is not centered on resistance to the KMT anymore, but on resistance to and experience of China and "Chineseness". Old school Taiwanese independence activists are full of hate for the KMT and constantly ask when Taiwan will be independent. New style Taiwan identity types regard the KMT as yesterday's failed politics, tainted with China and Chineseness, and the independence question as settled: everyone in Taiwan is pro-independence and Taiwan is already independent. Scholar Frank Muyard identifies a key moment: in Nov 1987 people in Taiwan were finally legally allowed to visit China. From that point on, Taiwan people began to experience how different they were from Chinese, a process only accelerated by the arrival of millions of Chinese tourists on Taiwan, and the movement of hundreds of thousands of Taiwanese to China.

I've already talked too much, but let's make one last point: what is the function of the "rising Taiwanese identity" as a media trope? Anthropologist Scott Simon pointed it out to me in a conversation on Facebook: the trope de-legitimates this Taiwan identity by rendering it as a "new" thing, recently emerged. Newness is bad for political legitimacy. Humans have a near-universal drive to locate legitimacy in something old, one reason Taiwanese are working out their new identity by searching for aboriginal ancestors: "look, we're old in the land." The antiquity of aborigines in Taiwan is thus pressed into service as a source of legitimacy for the new Taiwan identity. But the Sunflowers, that concrete manifestation of the "new identity", themselves recognized its connection to the old anti-KMT identity when they ceremonially welcomed the previous generation of activists to the Legislative Yuan during the occupation. They know their roots, even if the international press is either ignorant or ignoring.

Of course, that idea of "newness" for the Taiwan identity also helps legitimate the old days of the old governing party. What? New media tropes helping the pro-China party? Plus ca change...